What kind of data is appended to the message encrypted in AES128-CBC?

The chosen algorithm in the handshake is AES128_CBC_SHA.

So if I understand things correctly, the POST request is encrypted and sent, then we use the last cipherblock of this request as an IV for the message "A" to be encrypted.

However, when sniffing the traffic with Wireshark I noticed that the size of the encrypted data is of 32 bytes even if Wireshark decrypt it only as 1 byte : 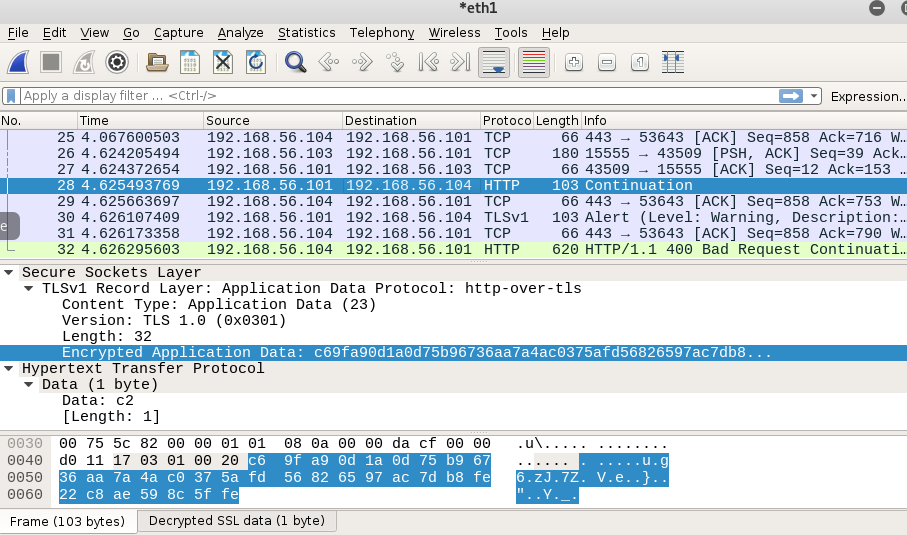 So my question is : what is the nature of the appended data, padding, or info about the length of the message, or both ?

Also, I encrypted both 16 and 32 bytes and I respectively end up with 48 and 64 encrypted bytes, even though padding is not necessary (I'm using messages of the block size).

So my question is : what is the nature of the appended data, padding, or info about the length of the message, or both ?

One correction to a statement you made:

even though padding is not necessary (I'm using messages of the block size).

Actually, even if the 20 byte HMAC wasn't added, you always have to add at least one byte of padding; if the prepadded message was a multiple of 16 bytes long, that means that you'll need to add a full 16 bytes of padding. If you encrypt a 12 byte message (so it becomes 32 bytes after the HMAC), that becomes 48 bytes after padding; if padding was not added, then on decryption, there'd be no way to distinguish between "this decrypted message was precisely 32 bytes long", vs "this decrypted message was shorter than 32 bytes, and had padding added"

Not the answer you're looking for? Browse other questions tagged encryption aes tls cbc or ask your own question.

2
Is storing original file size in an encrypted file header a bad idea?
2
Is it safe to use GZIP to avoid padding related attacks
2
Is it safe to AES-CBC and AES-CMAC both using the same key?
2
poodle padding multiple blocks?
1
Padding size with a CBC Block cipher in TLS
2
What could be the problem with this TLS 1.2 Client Finished Message approach?
3
How does padding oracle attack work with bytes larger than possible length?
0
How is TLS 1.3 application data encrypted with AES-GCM sent 'over the wire'?