Can GCM be implemented with a stream cipher instead of a block cipher? If no, then what security flaw does it have?

If yes, then which possibility from below two is better in terms of security? In terms of speed, option ONE seems better as Stream cipher will be initialized only once in it (assume the input data consists of n blocks{0,1,2...n-1} where each block is of 128 bits). 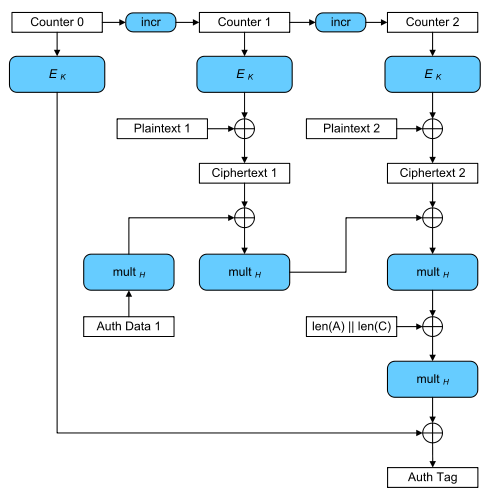 In AES/GCM, every use of AES can be expressed in terms of AES-CTR:

In fact, it is highly possible and even sensible to implement GCM out of an exclusively CTR implementation of AES (see my GCM code for an example).

Since AES-CTR is supposed to be a strong stream cipher, indistinguishable from a random source, we can replace it with another stream cipher, and things should still be fine in terms of security (i.e. it won't be made worse). In details, this would mean the following:

With this description, we see that AES-CTR is actually a bit lousy with regards to IV management. The specific details of IV construction are meant to avoid nonce reuse; AES-CTR for a run of $k$ blocks "burns up" $k$ successive nonces. This is the reason why counter starts at $1$ for the block to be XORed with the GHASH output, and $2$ for the data itself: that way, the values cannot collide with the all-zero block for $h$. Use of a secure stream cipher in lieu of AES might possibly relax such constraints, and in fact be more secure than GCM(*).

Of course, this raises the question of why you would do that. The GHASH part of GCM is usually the problematic one when it comes to implementation, not the AES. GHASH is very fast on hardware platforms that have dedicated opcodes (x86 with AES-NI, POWER8...) but these platform also provide an AES hardware implementation that outperforms software-based stream ciphers. In practice, you would probably be better off with Poly1305, which is commonly used in combination with the stream cipher ChaCha20, as described in RFC 7539.

(*) With the usual caveat that something can be "more secure" than AES/GCM only insofar as AES/GCM is less than ideally secure, but it is currently unbroken. We still have a few academic misgivings related to the relatively short IV, in that random 96-bit IV have a not completely impossible probability of collision.

Not the answer you're looking for? Browse other questions tagged block-cipher stream-cipher gcm or ask your own question.

0
Can Galois/counter mode be used for stream ciphers (Galois/stream mode)?
2
Which is slower, AES or GCM hash (GHASH), if CPU has no special instructions?