Is there an efficient algorithm that allows to construct a cryptographically secure $n$-bit hash function based on two unkeyed $n$-bit permutations?

Let $f(x)$ and $g(x)$ denote two independent, “ideal”, unkeyed, public $n$-bit permutations (two publicly known bijective functions that produce $n$-bit outputs from $n$-bit inputs), where $n$ is an arbitrary natural number greater than or equal to $3$ (the number $3$ is here because it is the minimal size of a “cryptographically significant” S-Box).

Does there exist an efficient iterative algorithm (based on $f(x)$ and $g(x)$ as the underlying functions) that allows to construct a cryptographically secure $n$-bit hash function for $k$-bit inputs, assuming that $k$ is an arbitrary natural number greater than or equal to zero (that is, there should be no limit on the maximum length of the input)?

If I understand the question correctly, one such possible construction would be something that was used in the SHA-3 competition candidate Grøstl, where an iterated compression function is built from two fixed permutations $P$ and $Q$: 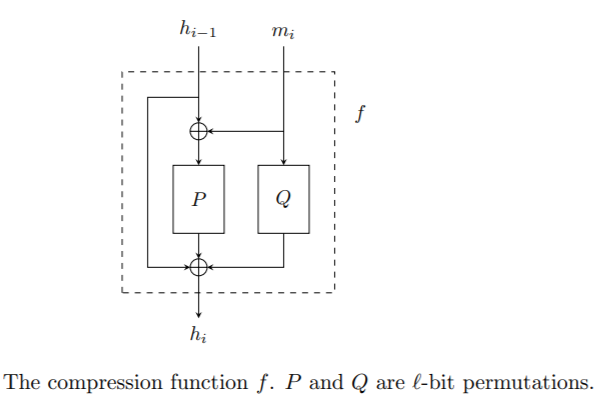 The security proof of that construction is based on the paper: P.-A. Fouque, J. Stern, and S. Zimmer. Cryptanalysis of Tweaked Versions of SMASH and Reparation. Selected Areas in Cryptography 2008, LNCS 5381, Springer, 2009

It is impossible to construct a collision-resistant hash function from one-way permutations, via a black-box construction. Thus, the answer in principle is no; such a construction is impossible. Finding collisions on a one-way street: Can secure hash functions be based on general assumptions? by Simon (Eurocrypt'98). This answer does not relate to heuristic constructions, but you cannot do this with a proof of security (unless it's not black box).

The question here actually relates to "ideal" permutations, and under such an assumption it may be different. (Although, I'm not sure what is meant by "public" ideal.) My answer referred to (non-ideal) one-way permutations.

Not the answer you're looking for? Browse other questions tagged hash algorithm-design or ask your own question.

16
Cryptographically secure keyed rolling hash function
3
Are there full cycle cryptographic/one-way hash primitives?
0
What are the properties of a function based on multiple iterations of a pseudo-random permutation?
4
Collision-free one-wayish function mapping 32 bit to 32 bit
3
What are the consequences if someone finds the accessible 1600-bit block $X$ and $R$-bit block $V$ such that $\text{Keccak-}f[1600](X \oplus V) = X$?
0
Is there an $n$-bit hash function such that $n$ is equal to the length of input and the collision resistance is close/equal to $2^{n/2}$?
0
Is there an efficient algorithm that allows to obtain a uniform distribution of all possible $4$-bit permutations from a single keyless $4$-bit S-Box?
4
Expected Hamming distance of $a+b$ and $(a \oplus b) \oplus ((a \land b) \ll 1)$