How to derive a passphrase from a hash?

I'd like to generate a passphrase derived from a hash fingerprint. The passphrase consists of short and human-pronounceable words from a phonetically-distinct wordlist. The derivation is a one-way function and it is acceptable for this application to lower the security against collision attacks/reduce the keyspace.

For this application, is it OK to use a pseudo-random number generator with the hash value as the seed to select the words of the passphrase? Are there better alternatives?

Edit: Below is a visualisation (Mathematica source) of using base conversion which is not a divisor of hash size (in this particular case $|wordlist|=5$ with 3 words derived from a 8-bit hash). 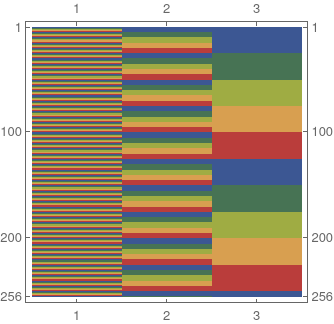 One possible solution is to use base conversion, and use the resulting "digits" of that base as index in the dictionary.

As that's probably a bit too abstract, so let's use some pseudo-code:

The hash is treated as a positive number. This number is then converted to a number of digits using the size of the dictionary as base. Each "digit" (which is really just another large number between 0 and the dictionary size) is treated as index into the dictionary. Then we just perform a simple lookup and concatenate the words found.

As the left variable has a very big number value, you might have to use a "BigNum" library (a 64 bit integer would be too small). Most language or cryptographic API's will supply one. To speed things up a bit you might want to look for a function that performs divide and remainder in a single step, because that will incur fewer CPU operations than doing the division and remainder calculations separately.

As mentioned in the comments, there is no PRNG required. A PRNG is useful for seed expansion, but that doesn't seem required; only just conversion seems required. As the hash already is well distributed you can use the leftmost bytes of the hash to use fewer words.

You present a 256-bit hash. This has $2^{256}$ possible values. A dictionary of common, easy-to-remember English words contains perhaps $2^{16}$ words. Thus you will map each 16 bits (4 hexadecinal characters) to an English word, and uniquely identify each hash by a string of 16 words.
Example: layout retire correspondence village chapter tough election origin sacrifice disappointment blue romantic wall loose snarl
Not so easy to remember!

The base conversion proposed by Maarten Bodewes's answer is fine to convert some of the hash into words. But it leaves aside a stated goal:

There is a well-established way to increase collision resistance and premimage resistance: re-hash the hash fingerprint with a purposely slow hash as used in password-based application, such as Argon2 or Scrypt, before performing the conversion to words (by the same method as above).

However, finding a particular preimage (something hashing to a given value, or something different from something given but hashing to the same value) becomes truly hard: with the same kind of CPUs¹, after $(4\cdot5000^4)/2\ \text{CPU⋅second}$ (>39 million CPU.year) the probability is <40%.

¹ Adversaries tackling that may want to invest huge amount of money on special-purpose devices for extra speed and power efficiency compared to normal CPUs, and then the RAM usage parameter of Scrypt or Argon2 would imply they need a controllably large amount of RAM in each device.

Not the answer you're looking for? Browse other questions tagged collision-resistance pseudo-random-generator pseudo-random-function entropy or ask your own question.

2
Seeking special-use fingerprinting/hashing algorithm
21
From hash to Cryptographic hash
1
Function to derive an integer from a given password
2
PRF from hash function?
6
Entropy preservation through cryptographic hash function
3
Randomness extractors from Bourgain’s breakthrough- applications?
4
Constructing a PRF from PRG, with more parallelism