How can I implement the "Multiplication Modulo" and "Addition Modulo" operations in IDEA?

I am currently working on IDEA (International Data Encryption Algorithm), and I don't know how to perform Multiplication Modulo and Addition Modulo.

This is how IDEA operates:

IDEA operates on 64-bit blocks using a 128-bit key, and consists of a series of eight identical transformations (a round, see the illustration) and an output transformation (the half-round). The processes for encryption and decryption are similar. IDEA derives much of its security by interleaving operations from different groups — modular addition and multiplication, and bitwise eXclusive OR (XOR) — which are algebraically "incompatible" in some sense. 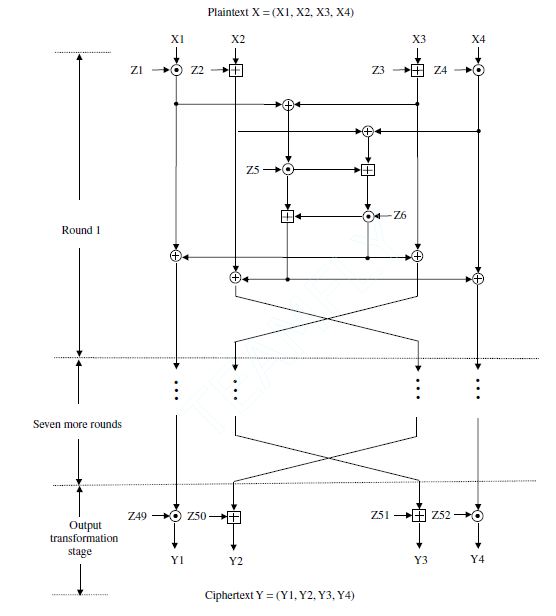 Multiplication modulo $2^{16} + 1$ is exactly the same, except you multiply the two numbers instead of adding and you subtract $2^{16} + 1 = 65537$ repeatedly instead of $2^{16}$. And note the extra condition required by IDEA to prevent entropy destruction, that if one of the operands is zero, it is replaced by $2^{16}$ (this is not part of the definition of modular multiplication, but it is required to ensure reversibility - can you see why?).

This is a bit long-winded, fortunately there is a modulo operation available in most programming languages, usually called "mod" or "%", which you can use. Finite data types also have an implicit $2^n$ modulo operation where $n$ is the data type's bit width, through overflow (for instance, if you have a 1-byte variable set to 255, and increment it by one, it'll become zero), unless they are explicitly designed to saturate. There are also bitwise shortcuts you can use for IDEA to make it much faster since multiplication is slow, but I guess you don't really need those.

For a more detailed explanation, please see this link.

Not the answer you're looking for? Browse other questions tagged encryption block-cipher implementation idea or ask your own question.

2
How to perform Multiplicative Inverse Modulo in IDEA