No, not strictly according to NIST SP 800-90x philosophy.

It's used to reshape a non-uniform raw entropy distribution that arises from digitisation, into a uniform distribution ($h_{out}$) but not necessarily 1 bit/bit. Therefore unusable as is. And so NIST recommends those 'components' you mentioned. You can also use your own DIY algorithms ( §3.1.5.2 Using Non-vetted Conditioning Components). It doesn't really matter as long as you realise that a deterministic algorithm cannot increase the Kolmogorov entropy rate through it.

Using a downstream PRNG simply increases the apparent entropy rate of the overall construction. It's exactly what /dev/urandom did and now the new /dev/random does. So $h_{out}$ is used to seed and reseed the PRNG in whatever manner is required to recharge the PRNG's internal state. NIST calls this PRNG a Deterministic Random Bit Generator. It's meant to be used as:- 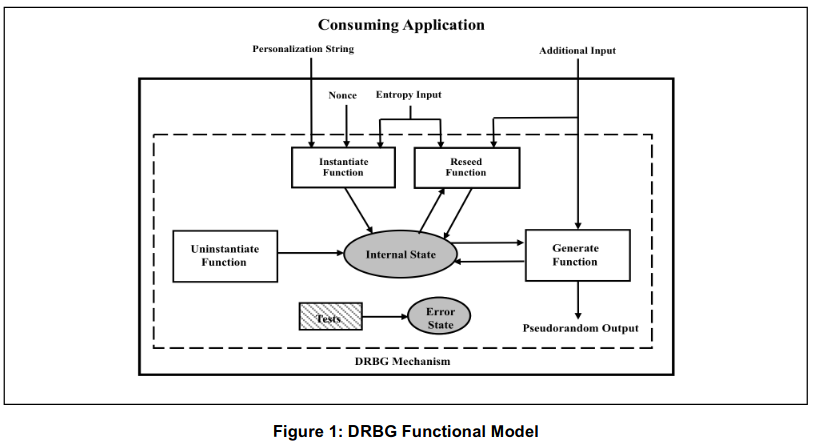 Notice 'Entropy Input' at 12 o'clock. Pragmatically, and in the rest of the world, you don't need any form of conditioning at all. You can just use entropy extraction making sure that $h_{out} \ngtr h_{in}$, but that's not the NIST way. Which I infer is what the question is about.

Not the answer you're looking for? Browse other questions tagged random-number-generator randomness pseudo-random-generator trng or ask your own question.